The 3 Best Lean Games Every Company Should Learn to Play.

Confucius may have been the first experiential teacher…

Here at St Andrews Lean Consulting we agree with Confucius. Getting involved is the best way to learn new techniques and the most effective way to practice implementing them in your work place. This is why lean games are such a valuable tool to companies moving towards the Lean Philosophy.

So what is 5S and where does it come from?

5S is an approach for workplace organizations; it drives workplace efficiency and productivity improvement. 5S is a series of steps that can be used in the Implementation Stage of the SALC 8 Stage Model, but is also an every day “Good Practice” for which organisations can build strong foundations for Continuous Improvement. Translated from the Japanese words: seiri, seiton, seiso, seiketsu, and shitsuke, into Sort, Straighten, Shine, Standardise, and Sustain.

But don’t mistake it for Housekeeping. “Work place organisation” may mislead one into believing 5S is a tool for optimization office cleanliness. Rather, it refers to the way each element in the work place is managed and organised.

How do we play The 5S Numbers Game?

The aim of the game is to demonstrate how valuable 5S can be in your business when utilised properly.

Step 1: Each sheet of paper represents a workplace. During a single shift (20 seconds) the task is to strike out numbers 1 to 49 in the correct sequence. 1 , 2, 3… Record everyone’s score, lowest score becomes score for whole team.

Step 2: Implement “Sort”. We know the task is to strike out numbers 1 to 49, therefore numbers from 50-90 are waste, and so they can be taken out.  Repeat the task and record the times.

Step 3: Implement “Straighten”. We have installed the grid system. Now we can look through the numbers more effectively as they are in smaller more organised groups. We have provided a home for everything. Repeat the task and record the time.

Implement “Shine”. Is the information fit for purpose? We have cleaned up all the numbers by making them the same colour and the same orientation. Repeat the task and record the time.

Step 4: Implement “Standardise”. Here we define the standard that we want to work to. We know the task requires us to strike through 1 to 49 in order, so let’s reorganise them to make the completion of the task as easy as possible. Repeat the task and record the time. By this stage everyone is able to complete the task within the shift, with a team score of 49.

You will have noticed there are 2 numbers missing from the sequence. We cannot complete the task without these numbers (in your work place this could be a piece of data, or information about a client). Start the clock and every 20 seconds tell the finder how many shifts have passed whilst they have been looking for this missing numbers. Do this before and after we have implemented 5S.

Step 5: “Sustain”. This is step is all about custom and practice. Your team will know all about the importance of teamwork, and your managers should be committed to a 5S system. The correct procedure has become habit, now the only thing left to do is to regularly review and monitor your progress.

Skills, tools and techniques the 5S Game may help you with include 5S (that’s a surprise!) and Daily Lean.

Want to know more about 5S? Take a look at: http://standrewslean.com/lean-resources/lean-tools/5s/ 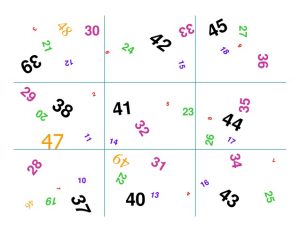 Our next game will show up the Picasso’s and the van Gogh’s in your work force.

What is The Standard Fish Game all about?

Standardised work is arguably one of the most powerful but under-utilised lean tools. By documenting the best-current practice you ensure that every client or customer receives the same offering, reduction in variation, easier training for new team members and you set a baseline for continuous improvement. As the standard improves, the new standard becomes the baseline for further improvements, so on and so forth.

So The Standard Fish Game is all about documenting the process for drawing a fish, which matches the service receivers’ requirements.

How do we play The Standard Fish Game?

Step 1: Ask your team to draw a fish on a sheet of A4. As mentioned before, you will see a vast array of artistic creations. The variation in fish design stems from a lack of instructions on how to draw a fish. This is not a documented process. None of fish are draw to a customer specification. Voice of Customer is important concept in any business process.

Step 2: Give your team a sheet of A4 with 3×3 grid on it. Read out the following instructions

Draw a letter X in the centre box in the left column. The X should fill the box touching the intersections

Draw an arc for the mouth starting at the bottom right intersection. Must be a happy fish!!

Step 3: Compare the 2 sets of drawings. The second set of drawing will be much more similar. The waste in the process has been eliminated, and the standard of work will be much higher.

Step 4: These sets of instructions may need review. They may not be as comprehensive as first thought. Drawing fish may have developed since the first time your company drew a fish. The customer may now be asking for a shark.

Skills, tools and techniques the Standard Fish Game may help you with include Best Practice, Communication, Standard Work and Variation Reduction.

Having trouble keeping all your balls in the air? There’s a game for that…

What is The Ball Game all about?

The Ball Game is all about eliminating waste in your company activities and continuously improving processes.

In two groups, of no less than 5, all you need to do is pass 3 balls between the 5 of you in the same pattern. Sound simple enough? How quick do you think you can do it? Less than a minute? Not bad. Not as good as 0.5 seconds though. I can hear you saying “0.5 seconds? No, surely not! It takes me 0.3 seconds to blink!!” Let’s look at the process.

This game could be a simulation of any process. From Issuing a student Confirmation Letter to the Accounts Payable Process. The Ball represents the task and the movement represents how the responsibility passes from team member to team member. Our team watched this game played at a conference last year. At the beginning of the process the 5 team members were sat around a circular table and they threw the ball to each person. It took them 56 seconds to complete the task. The only rules were:

They reexamined their process and decided that crossing the table wasted too much time. They lined up and tried again. This process of Plan Do Check Act, allowed them to trial and error different approaches. This method took 21 seconds. Good effort but the process could be reduced further. After a few more tries they got it down to 0.5 seconds. Now you’re thinking “this is not possible, tell us how!!” One member of the team stood in the middle of the group, the other members in a circle round the outside. The member in the middle held the three balls in one hand, the members on the outside held out their opposite hands. Touching each member’s hand with the three balls, the middle member span round in a circle. Phenomenal.

Skills, tools and techniques the Ball Game may help you with include Communication, Continuous Improvement, Flow, PDCA, Teamwork and the Eight Wastes.

If you would like to find out more about how we can help, you can contact us here.

For all enquiries please get in touch